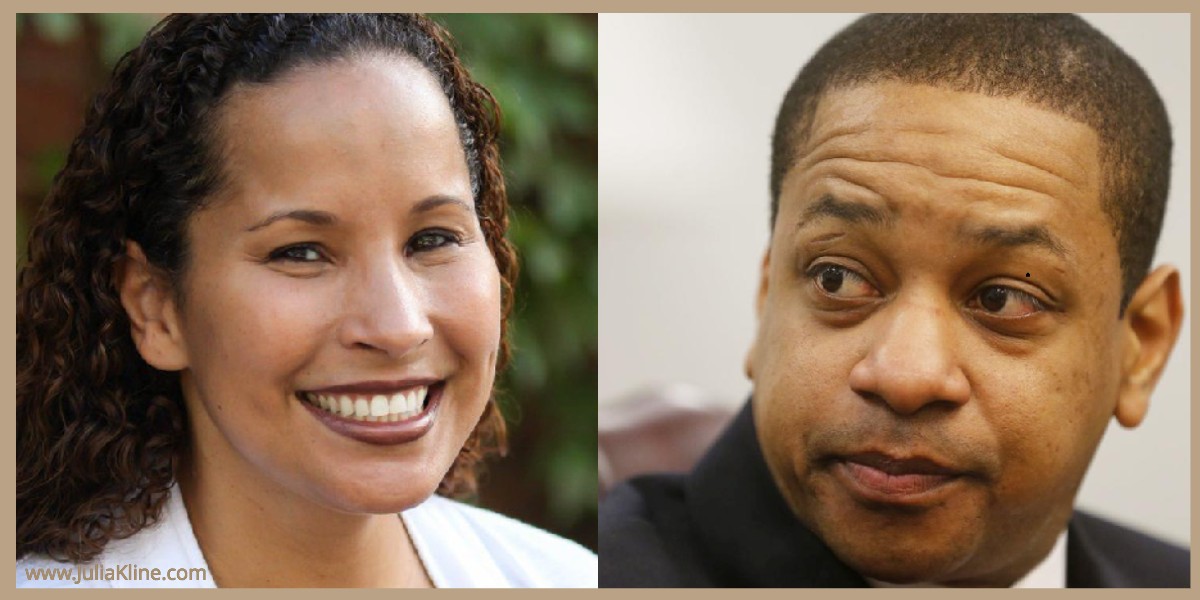 The important questions to ask ourselves, as we grapple with the most recent bombshell news story out of the State of Virginia this week, are:

We keep focusing on the wrong part of the story

What jumps out to me most about the statement from Vanessa Tyson is that she takes the time to explain the numerous & complex reasons she didn’t come forward with her allegation in 2004, and why she DID do so now, first in November of 2017 and then most recently last week.

After the assault, I suffered from both deep humiliation and shame. I did not speak about it for years, and I (like most survivors) suppressed those memories and emotions as a necessary means to continue my studies, and to pursue my goal of building a successful career as an academic.

That October [after Fairfax began his campaign for Lt. Gov of Virginia in 2017], as the #MeToo movement intensified, women throughout the world began forcefully speaking out about the sexual violence they had experienced and the impact of those experiences on their lives. The courage of so many women coming forward to confront powerful men and systems that allow such abuse to occur are part of what inspired me to action. I felt a responsibility to myself, the beloved students I teach, and the brave women I’ve tried to help overcome their own trauma.

The passion and resolve of so many survivors, coupled with the job security that tenure afforded me, {emphasis added} gave me the strength I simply did not have in 2004. By December 2017, I not only told many friends that Mr. Fairfax had sexually assaulted me but I also reached out to a personal friend at The Washington Post and spoke to his colleague about the assault.

In the several articles I’ve read that claim to contain her statement, not one has included this important part of her story. Instead, they focus just on the graphic details of the assault.

This must change!! Journalists have a responsibility to illuminate these forces that keep women silent.

It’s ultimately up to each individual survivor to tell their story or not. And until and unless they feel ready, they shouldn’t be forced to go through the potentially re-traumatizing experience of detailing their ordeal, to say nothing of whatever legal fight might result.

But every time a survivor DOES tell her story, it makes it just a little bit easier for other survivors to tell theirs.

For that reason, we as a society must do everything in our power to encourage survivors to come forward. We can do this by shining a bright light on each survivor’s struggle to come forward, as well as her (or his) ultimate decision to do so.

Who do you believe and why?

Another thing I’d like to talk about is that while Tyson’s statement is graphic and explicit, I frankly wish it was MORE so.

Because what everybody’s trying to determine is, Is she telling the truth? Did Justin Fairfax, the Lt. Governor of Virginia, force his penis into her mouth against her will? Or was the act consensual?

What Tyson says about the act in her statement is,

What began as consensual kissing quickly turned into a sexual assault. Mr. Fairfax put his hand behind my neck and forcefully pushed my head towards his crotch. Only then did I realize that he had unbuckled his belt, unzipped his pants, and taken out his penis. He then forced his penis into my mouth.

Utterly shocked and terrified, I tried to move my head away, but could not because his hand was holding down my neck and he was much stronger than me. As I cried and gagged, Mr. Fairfax forced me to perform oral sex on him.

I cannot believe, given my obvious distress, that Mr. Fairfax thought this forced sexual act was consensual.

To be very clear, I did not want to engage in oral sex with Mr. Fairfax and I never gave any form of consent. Quite the opposite. I consciously avoided Mr. Fairfax for the remainder of the Convention and I never spoke to him again.

I’m inclined to believe Tyson’s statement. For one thing, there’s absolutely no reason for her to lie about an incident that happened 13 years prior. Secondly, her words are believable.

That said, she could have made her story more believable by telling us even more.

For example, she says that while Fairfax was forcefully holding her head on his penis, she “tried to move [her] head away,” that she “cried and gagged,” and was in “obvious distress.” But what was she doing with her hands, her legs, the rest of her body? Was she hitting him? Trying to squirm away?

And what happened after the events she describes? How did the two of them go from his penis being in her mouth to them both exiting the room?

Did he … complete his act? And if so, what did he say or do while he’s standing up, zipping his pants and walking way from her?

Did he smile and make some self-satisfied comment, like he thought it had been a consensual act? And if so, how did she respond? Or did he look at her with scorn and conquest, knowing goddamn well he had just assaulted her for his own pleasure?

And what did she do once he removed his penis from her mouth? Did she jump up and start screaming at him? Sit crumpled on the floor in a pile of shock and horror and disgust? Silently compose herself while giving him an icy cold stare?

And how did they exit the room? Did they leave together? Did one of them go first? Did either of them use the bathroom?

And finally, where did she go as soon as she left? Did she go back to her own room to take a shower, cry, scream? Did she change her outfit? Did anyone notice she’d been gone, and what did she say to explain her absence?

I wrote in the first half of this essay about how difficult it is for women to come forward with the stories of how they’ve been assaulted. Asking them to provide every last graphic detail might be too much, and certainly we shouldn’t require it, in order to deem a given allegation believable.

There’s also the fact that survivors of assault sometimes don’t remember all the details. Dr. Christine Blasey Ford educated all of us about this back when she told us about the time she was sexually assaulted by Brett Kavanaugh and Mark Judge (allegedly, eye roll),

When I was assaulted in Puerto Vallarta at the age of 15 by two men pretending to be police officers, I remember the skirt I was wearing; I remember the lecherous look on the one man’s face; I remember the disgusting brown slime dripping down the walls from the ceiling. But I have no idea what day of the week it was, the name of the club I’d been at, anything at all about the two boys I was with, or how I’d gotten home. None of those gaps in my memory change the facts of what happened to me that night.

So while details aren’t always available, they can be incredibly useful.

The more details a story has, the more believable it is. Just imagine for a moment that Tyson’s statement DID include the kind of details I asked about above. It would make her account really super hard to disbelieve, wouldn’t it?

Because it may be true that she “Cannot believe, given my obvious distress, that Mr. Fairfax thought this forced sexual act was consensual.” But as anyone who has ever engaged in that particular sex act knows, the woman (or person whose mouth it is) does sometimes gag and tear up, even when the act is consensual.

I can imagine a man – especially a self-centered, clueless, imperious man – being able to convince himself, “She’s loving this,” even while he’s assaulting her.

But if she clawed and kicked at him while it was happening or screamed at him when it was over, that certainly would have clarified for him that what he had just done had been a non-consensual assault.

Nothing exonerates Fairfax for what he did (assuming Tyson’s statement is the truth). If she said or did nothing – besides her “obvious distress” – to let him know that she felt assaulted by what he had just done, he is still guilty of sexual assault.

However, her providing us with these additional details could explain the discrepancy in their two accounts of what happened.

The more truthful you are, the more powerful you become

Sharing details – every last inch of the Truth – is an act of empowerment. It’s a way of declaring, “I have nothing to be ashamed of so I’ll tell you EXACTLY what he did to me.”

If she had told us:

that would be a really powerful way of reclaiming her authority and her agency, wouldn’t it?

Shame is a powerful motivator. It’s almost always cited by survivors who don’t come forward as a reason for keeping their ordeal a secret.

But shame can only exist in darkness. When the truth is brought out into the light, shame is burned away. Every time a woman burns away the illusion that being assaulted is a cause for her to feel shame, it makes it easier for other women to conquer their own shame and come forward to tell their stories.

The lessons to take away

I honor Vanessa Tyson for bravely coming forward to tell her story. I hope that if other women have been similarly assaulted by Justin Fairfax, that they find the courage to come forward as well.

I hope that Justin Fairfax is no longer the kind of man who would force a woman to give him oral sex (assuming it’s true that he once was). I hope that if so, that he finds the courage to talk openly about the path of personal growth that he’s been on, and encourage other men to honestly examine their own past.

What do you think about this story? Do you believe Vanessa Tyson? If so, why? Tell me about it in a comment or by hitting me up on any of these social platforms.

And if you’re a person (man or woman) who would like to share your own story of sexual harassment or assault with me, I invite you to do so.