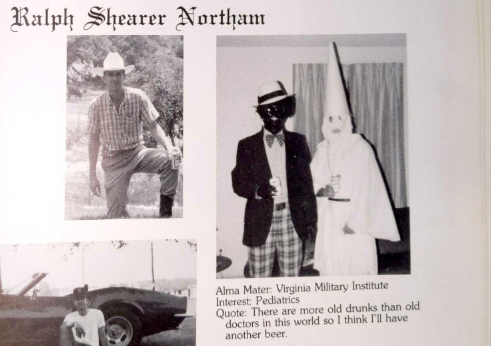 Ralph Northam, the Democratic governor of Virginia who was elected a year ago largely because of the fallout from the racist rally in Charlottesville, is in hot water over a recently unearthed photo of him when he was 25.

In the photo are two smiling people in costumes: one dressed in blackface and the other in a KKK robe. Northam has acknowledged the photo is real, and that yup, that’s him. (The photo appears on his page in his medical school yearbook, so the chances the photo wasn’t authentic were pretty slim).

There have been robust calls from Democrats and progressive social justice organizations (including the NAACP) for him to step down, for reasons including:

But not everybody is insisting he step down. Their reasons include:

But the much more important question to me is, What meaning will people attach to his decision?

Or, what will Northam’s decision add to the debate currently raging in this country about how to deal with the misconduct of our past?

We as a country – but also as communities within this country – need to adopt the principles of transformative justice, if we are to ever stop bludgeoning one another over wrongful past deeds.

What Does All This Mean for Northam?

In the case of Northam and the current scandal, steps 1 and 2 have been handled. The truth of the situation was pretty well established when he confirmed the photo was real, and he took responsibility in his statement.

We don’t yet have the full truth of what happened. Because while the photo is hurtful and insensitive, it’s not the full story. Knowing that the photo is real isn’t the whole Truth.

What people still want to know is, WHY did Ralph Northam pose for that photo? Was it peer pressure he was immediately sorry for, or did he in fact at the time think it was funny and appropriate?

While Northam’s statement included the words “I’m sorry,” and did acknowledge that his actions harmed people, what he didn’t do is explain how he supposedly transformed from a 25 year old who thought a costume like that was a good idea into a 59 year old who expects us to believe his stated progressive values are sincere.

What this also means is that while Northam appears to have sewn up #5 Commitment to be Better and #6 Accountability for Better Actions, there’s a gap there. We’re left with a hollow in the pit of our stomach, that place where we aren’t quite sure we can actually trust him.

Which leaves us with the question, what should Ralph Northam’s consequences be? What should happen to him as the result of his misconduct?

At this point, I can’t say that definitively because we don’t have enough information.

What do YOU think about Ralph Northam? Which of the arguments for and against his resignation hold the most water for you? Leave a comment or hit me up on any of these social platforms: