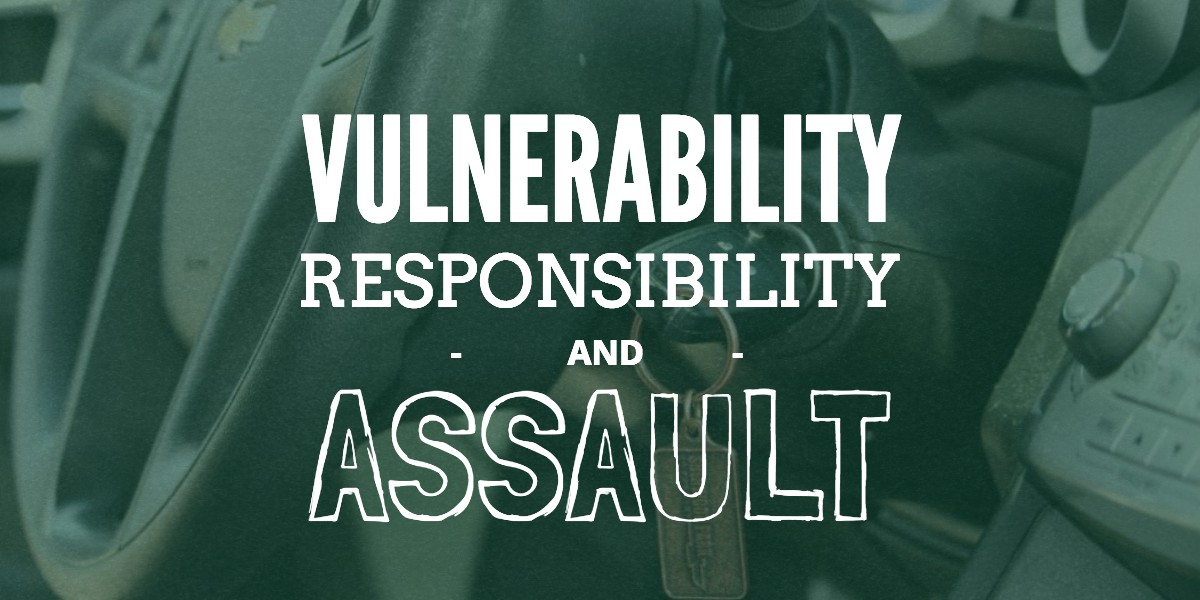 Criminals don’t get to rob you just because you make it easy. So why should a woman’s clothing choices be blamed if she gets sexually assaulted?

Years ago, my car was stolen. The police caught the guy (and yes, it was a man who stole my car), and I soon found myself in a courthouse over the matter.

After the prosecutor spoke to the thief (excuse me, the alleged thief …. who became the convicted thief minutes after this moment in the story) to get his version of what happened, she came back to me to ask: after your parked your car, did you leave the keys in the ignition and the doors unlocked?

After your parked your car, did you leave the keys in the ignition and the doors unlocked?

Yes, I had definitely done that. But I wasn’t sure what would happen if I admitted it. After all, that was a verifiably stupid couple of things I had done. Who leaves their car parked in a public lot for a week with the doors unlocked & the keys in the ignition?

Was it MY fault my car had gotten stolen?, I suddenly found myself wondering.

The prosecutor must have read my dilemma all over my face because the only thing she said to me was, “It doesn’t change the fact that he’s guilty. I’m just trying to get an accurate picture of the facts.”

It doesn’t change the fact that he’s guilty.

In our rule of law society, criminals aren’t excused from committing crimes just because their victims make it easy for them.

Clarification: I’m sure the prosecutor didn’t actually say, “he’s guilty,” because another thing that happens in our rule of law society is people are believed innocent until proven guilty. I’m sure what she said was something more like, “It would still make it a crime to take your car, even if your keys were in the ignition and your doors were unlocked.” But saying it that way wouldn’t be as powerful rhetorically now, would it?

After all, if the man who noticed the keys in my ignition had been a person of honor & integrity, rather than a criminal, he could have just kept walking. Or, if he’d been a really good guy, he could have acted to protect me by telling the security patrol in the garage.

Instead, he acted to take advantage of my vulnerability for his own benefit and pleasure by stealing my car.

When a woman is drunk, dressed provocatively or alone, she is vulnerable. People who encounter her vulnerability have a choice to make – they can act to protect her, they can ignore her, or they can take advantage of her vulnerability for their own benefit and pleasure.

People who act to protect her are mensches.

People who ignore her are … most people.

People who take advantage of her for their own benefit and pleasure are criminals.

Because “taking advantage of her for their own benefit” is just a coy way of describing sexual assault.

Another reaction people can have to this woman is, of course, they can judge. This happens most often after she’s been assaulted and her attacker has been caught – and especially when that attacker is privileged and/or esteemed. If, for instance, he’s an athlete or an executive, well-liked, successful.

Oh, and white. He has to be white. Because while a drunk woman deserves scorn in these people’s eyes relative to a WHITE man, she somehow miraculously becomes virtuous again when it’s a black man who attacked her.

Unless, of course, the WOMAN was black.

Wait, what? A black woman?? Be honest, white readers – this whole time you’ve been reading this story, you’ve been picturing a white woman, haven’t you? The young drunk, scantily-clad victim of sexual assault is always white in your mind, isn’t she? Probably a sorority sister??

Just to be clear, I’m not judging you, dear reader. I did the same damn thing myself when I was WRITING this essay. After all, I’m white and the story I told at the beginning about the car getting stolen happened to me (a, um, white woman). So in my own mind, the woman getting sexually assaulted was white too.

But let’s imagine for a moment that it’s a black woman who’s scantily dressed and heavily inebriated, and she gets assaulted by a man – and let’s for the sake of argument say it’s a black man. What’s the picture going through your head right now? Are you picturing a college campus? An expensive home or swank downtown office? A drug-infested inner city??

And again, I’m going to cop to the truth about my own deeply inbred prejudices: when I started to write about the black woman stumbling home drunk and scantily clad, I almost wrote, “from the club.” Whereas when I’d been writing about a white woman in that same situation, I mentally made her a sorority sister.

We ALL do it, white people. We’ve ALL (white, black, brown, rich, poor – ALL of us) been acculturated in the great U.S. of A. to view black people as “less than,” in all kinds of subtle and not so subtle ways.

The question is what do you do about those stereotypes that have been implanted in you? When you catch yourself picturing a black woman getting drunk at a club while in your mind a white woman gets drunk at a sorority party?

Do you get all flustered and embarrassed and awkward? Do you shame yourself for having had those thoughts? Do you attempt to do back flips of some kind to try and make up for these “shameful” thoughts? If you do, that’s what’s called white guilt. (And it’s also what leads to entitlement programs that are just as harmful as the repression and discrimination they’re meant to overturn. But to get into that would be an even bigger digression than this whole topic already is …)

Or do you get internally defensive? Mentally pushing back on the idea that you’re bad or wrong for being so prejudiced – “Hey, it’s not my fault for thinking that way. After all, it’s the TRUTH that most of those people act that way.” {sigh} THAT, dear reader, would make you – yup I’m gonna do it, I’m gonna get inflammatory, I’m gonna use the r word – a racist.

Or do you simply recognize that you had a thought you wish you hadn’t had, reaffirm that that is indeed a thought you don’t want to have in the future, and move on? Or even better, do you do a quick mental search for evidence to the contrary of the prejudiced thought you just had?

I demonstrated that process just a minute ago: I caught myself putting a black woman in a club rather than a sorority, acknowledged that the thought was racially biased, and quickly reminded myself, “Um hello, black girls go to college too! (and white girls go to clubs).

So anyway ….. This essay wasn’t supposed to be about race, so I’m going to quit holding your nose in the pile of poop that is your own racial prejudices and get back to talking about sexual assault. But hopefully we’re all being just a wee bit more honest with each other right now. I sure feel like I’m being more honest with you. And if you wanna get honest with me, you know the drill – leave a comment, tweet at me, something …

Where was I in my story?

Oh yeah, I had just gotten done making the point that women — scratch that, PEOPLE — don’t “deserve” to get assaulted, no matter what they’re wearing, where they’re walking or how drunk they’re acting. If a man assaults a woman, that man is solely to blame, period, end of story.

That pretty much wraps up what I wanted to say here today. But after I dragged you along through that whole examination of our racial prejudices (and that’s a perfectly great thing for a writer to do by the way – it’s just not what you signed up for based on this essay’s headline), I feel like I should add one more nugget to make it worth it for you to have stuck around:

hahahahahahahaha of COURSE you do. Every one of us has been traumatized for life by the spectacle of watching a sexual assaulter (not to mention an active alcoholic) – ALLEGEDLY {eye roll} – get appointed to the Supreme Court – despite the fact that the people who appointed him KNEW – they KNEW!!!!!! – what he had done. They just didn’t care.

Anyway, he left a vacant seat on the DC Circuit Court and President Little Fingers has nominated Neomi Rao to fill it.

Who is Neomi Rao? Well among other things, as reported here by BuzzFeed News, she’s a woman who thinks [that if a woman] “drinks to the point where she can no longer choose, well, getting to that point was part of her choice.” And OBVIOUSLY that’s a position I find heinous.

To be clear, that’s a viewpoint Judge Rao held in the mid 90’s as a recent graduate of Yale University (what is it with Yale being a breeding ground for straight-up misogynists?? That’s, um, Kavanaugh’s alma mater too … in case you don’t follow the news closely enough to have caught that reference).

I’m a strong proponent of the notion that people can change. The fact that Judge Rao said those things 20 years ago doesn’t automatically mean she believes them now.

However, the fact that she’s just been appointed by the Trump Administration leads me to believe she hasn’t changed one iota.

What are you thinking and feeling right now? Are you cheering me on? Spinning into a whirlwind of white guilt? So mad at me you’re getting ready to flame me with a vitriolic tirade of misogyny in a futile attempt to make up for your own lack of manhood?